Our shared values establish a workplace experience that encourages exceptional service, innovation, and happy and engaged employees. We believe investing in our people will ultimately create better customer experiences and a more productive organization. If you are interested in a career opportunity with Inyo-Mono Title Company fill out the application for employment and return to the contact below

The first work in Inyo and Mono counties was done by title searchers or abstracters in the bustling mining camps of the day. Normally, the camps seldom lasted long enough for established business to develop. Undoubtedly the title work done in law offices at the county seats was more enduring. Much of it concerned mines, and the litigation involved was likely to have taken far more time than the title work. Many attorney’s fee was paid in mining interest, the attorney’s themselves often developed acute cases of mining fever. 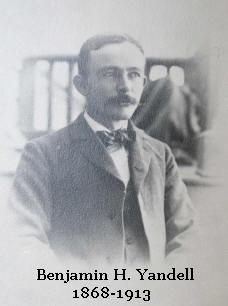 Attorney Ben H. Yandell in his office south of the courthouse developed a systematic title abstract business in independence. Cecil MacFarlane, a young stenographer in his employ, became interested in the work and purchased the business before Yandell’s death in 1913. MacFarlane was also a court reporter, and he served as Inyo County tax collector for the 1911-1914 term.

Business prospered for “C.I. MacFarlane, searcher of records,” who was searching records in Mono County also. In 1917 he acquired a small parcel of land directly across from the courthouse in Independence and built a new office building to house the company.  The business became known as the Inyo County Abstract Company, with it’s branch, the Mono County Abstract Company, occupying the same office.

In the 1930’s MacFarlane had four additional men on the staff to help search title on the town property which was being acquired by the city of Los Angeles. Inyo County was enjoying a temporary boom, while the the rest of the county was in a slump of a depression. Upon the death of MacFarlane in 1934, his widow, Irene, continued the business, with his daughter, Sally, acting as manager. When Sally married in 1946 she and her husband, William E. Burch, bought the company.

Title Insurance and Trust Company (T.I.) , enter the scene in 1949, when it acquired the two abstract companies. Acquisition of the two companies was one of the many steps in T.I.’S far reaching expansion program. T.I. became one of the largest and most respected of all title companies in the industry, with it’s origins dating back to the 1800’s. In 1961 , just north of the courthouse , a modern cement building, including a large vault for storing microfilm, had just been completed to house the growing company. In 1977, T.I. completed a new and much larger office building at 163 May Street, moving their facility north to Bishop to accommodate the increasing population of residents of  growing Mammoth Lakes. 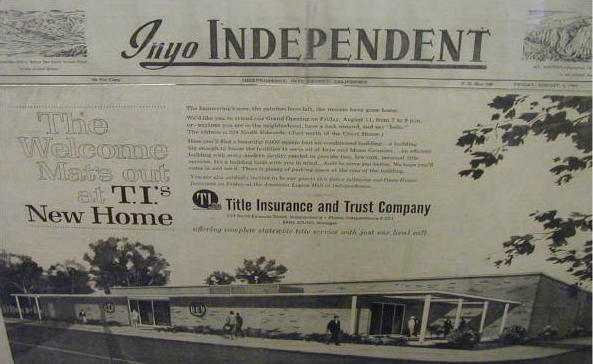 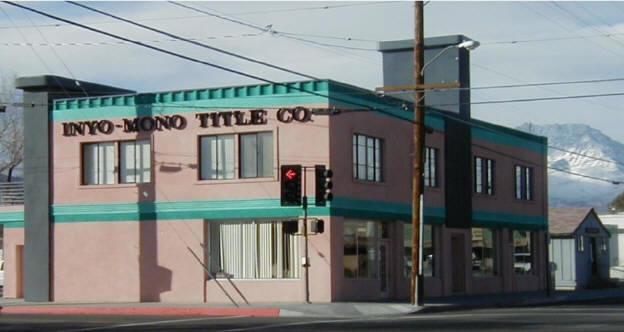 Jim had gone through the ranks of T.I. starting at the age of 18 in Ventura, managing various T.I. operations throughout California with title and escrow experience. Jerry also started his title career at 18 with T.I. in Oxnard in 1973. With 30 years and 10 years respectively at the time it seemed like a logical move to seek out a small title company for ownership. T.I. was selling smaller operations in California and the Core’s first choice was Inyo and Mono Counties, although neither one had ever visited the area. In January of 1983, T.I. sold its Inyo and Mono county operations to the Core family. The offer was made and accepted, sight unseen.

Father and son team, Jim and Jerry, and their wives, Mary Jo and Debbie, named their new company Inyo-Mono Title Company. Title Insurance and Trust Company located at 163 May Street in Bishop and (although modified) still stands today.

In October of 1984, the company moved its main office and joint title plants to Mammoth Lakes, leaving an Escrow branch in Bishop. In 1990 the company having purchased an obscure building on Line Street in Bishop, painted it pink and added a couple of green stripes. Highlighting the architectural features of the art-deco 1944 “streamline moderne” building was the talk of the town.

The Inyo and Mono plants were split at this time, Jerry moving Inyo to Bishop and Jim retaining Mono in Mammoth, both operations concentrating on each counties market. The US economy was at an all time low during this time. Each office needed to help make up the difference, as there was a competing title company, who also had to employ duplicates of personnel. It became very obvious that it was a matter of that, one of the two companies could not survive.

In the summer of 1993, Jim and Jo’s daughter, Judy, came on board to assist in the Mammoth Escrow operation. Granddaughter, Michelle, later joined the company in the summer of 2002 after graduating from Mammoth High School.

In 2003 Inyo-Mono Title Company purchased a larger building in downtown Bishop. This building is formerly known as the Forest Service building. This new location rejoined both Line street locations into one central location. The merge of offices allows customers immediate convenience and access to both Title and Escrow departments at one location.

The Inyo and Mono plants were then merged together once again and moved to this new location on West Line Street where it operated as the main title plant for both counties.

The building was remodeled, repainted and a John Pugh mural entitled “Dirt on Bishop” was commissioned and added to one of the exterior walls creating another beautiful landmark building in downtown Bishop.

In April of 2004 Inyo-Mono Title moved into the newly remodeled building at 873 North Main Street in Bishop, California. Our move in April 2004 allowed our Title and Escrow Departments to once again be joined in the same location thus allowing us to serve our customers more efficiently.

After Inyo-Mono Title company had moved to the former Forest Service building at 873 North Main Street, the former pink Escrow “streamline moderne” building was once again the hot topic in town. This time not because of the bold color scheme of the building, but because of an additional John Pugh mural that was commissioned in 2005. 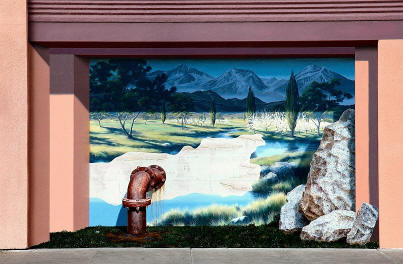 The mural sparked national controversy due to the subject matter of a dark chapter in Bishop’s unaddressed but controversial history, the California Water Wars.

Click on the mural entitled “The Drain” by John Pugh for more details including reviews by the NY Times, LA Times, Sacramento Bee as well as television coverage and different radio commentaries about the controversial mural.

In the summer of 2008 Jerry and Debbie’s son, Tyler Core also joined the family business after graduating from the University of San Francisco with honors. This making Tyler Core a third-generation Title Searcher in Inyo and Mono Counties.

On July 17, 2010, Jim Core passed away at age 74 from ALS (Lou Gehrig’s disease). Jim’s children and grandchildren continue with the operation today.

The Core Philosophy has always been, “We are all probably going to have to work for the rest of our lives (unless our lotto pool ever wins!) So, why not work and have fun too? And, if we can make enough money to pay our bills, so much the better!”

To be continued…and you are helping us write the next chapter.